United Food Operation (UFO) kicked off its 2020 winter food drive and distribution program on Friday. The food distribution will continue through March 28.

A nice turnout of supporters showed up to see this year’s program dedicated in the honor of some key folks, without whom the program would be so much less successful.

The individual honored this year is very familiar to food charities around the Kanawha Valley. UFO Chair Elaine Harris said Fred Clark has been so important to the program since he’s been on the Board of Directors. She said Fred works tirelessly, not only to help raise funds for UFO, but he also helps out with other food drives around the community. Fred’s nickname is “The Potato Man” due to his purchase of truckloads of potatoes that he donates to food pantries.

The organization honored this year was Communications Workers of America, Local 2001. Harris recognized Local 2001 for their annual food drives, which they do for UFO. Harris said that in a couple of recent years, when UFO funds ran short at the end of the winter, Local 2001 has come through with loads of food and funds that they raise from their workplaces. It has been a real nice shot in the arm for UFO and the 12 food pantries it serves.

An nice donation of $2,500 was received from Huntington National Bank. Two other significant donations of in-kind services were announced at the kick-off. MH Rents donated the use of a forklift vehicle for the food drive season and SGS Petroleum Services is sending a certified forklift operator over each Friday and Saturday mornings to assist with moving pallets of food around the warehouse.

Messages of support were read from United States Senators Shelley Moore Capito and Joe Manchin. Representatives from food pantries in Kanawha and Putnam counties, West Virginia State University, WV AFL-CIO, local businesses, and mayors from several cities served by UFO affiliated food pantries were on hand to show their support for the program.

As they have done many times before, WQBE-97.5 conducted a live remote from the event led by announcer Jeff Jeffries.

UFO Chair Elaine Harris said that Friday’s program will honor one local individual and one local organization for their outstanding support of the organization’s mission through the years. The public is invited to attend the program, which runs for approximately one hour.

UFO annually raises funds with which it purchases food that is distributed free of charge to 12 independent food pantries in Kanawha and Putnam counties. UFO accepts both donations of money and non-perishable foods.

Founded in 1981, United Food Operation has been fighting hunger in the Kanawha Valley with support from working men and women in local industries and government agencies and from many corporations with local operations. Each year, the program distributes food to pantries for a 12-week period in the winter and early spring, which are times of heightened need.

UFO is a totally volunteer-run nonprofit 501(c)(3) organization that operates out of donated warehouse space with donated equipment. Its extremely low overhead allows virtually all of the funds it raises to go to the purchase of food.

Donations can be mailed to:

Last year’s kickoff was highlighted with inspiring words from our keynote speaker United States Senator Joe Manchin. We were pleased to have a big turnout of representatives of local businesses and labor organizations.

Dutch Miller of Charleston recently collected non-perishable food as part of a dealership promotion and donated it to United Food Operation.

UFO Vice Chair Cliff Means estimated the total amount of food at 4,000 pounds. Means said this kind support from local businesses is critical to UFO’s mission. Thes food is now safely stored at the UFO warehouse and will be used in this winter’s food distributions.

On May 11, 2019 the National Association of Letter Carriers (NACL) will be collecting food in the Kanawha Valley with their Stamp Out Hunger food drive. United Food Operation will again be partnering with the Letter Carriers to distribute the food they collect to 12 food pantries in Kanawha and Putnam counties.

END_OF_DOCUMENT_TOKEN_TO_BE_REPLACED

The 2019 Winter Food Distribution Program will run each Saturday from January 12 to March 30, Elaine Harris, chair of United Food Operation (UFO), has announced. The season’s kickoff event will take place on Friday, Jan. 11.

END_OF_DOCUMENT_TOKEN_TO_BE_REPLACED

United Food Operation will begin its next set of food distributions to area food pantries in January 2019. The exact dates of the 2019 program will be determined at the group’s annual organizational meeting on Friday, December 21.

END_OF_DOCUMENT_TOKEN_TO_BE_REPLACED

On Saturday morning, April 7, United Food Operation completed its 12-week winter food distribution program. We will be gearing up again in May for the Letter Carriers “Stamp Out Hunger” food drive. Watch for it on Saturday, May 12.

Help is needed to obtain nice, new donated items for the Bid Away Hunger event on March 25. Donated items will be used as either silent auction items or game prizes. 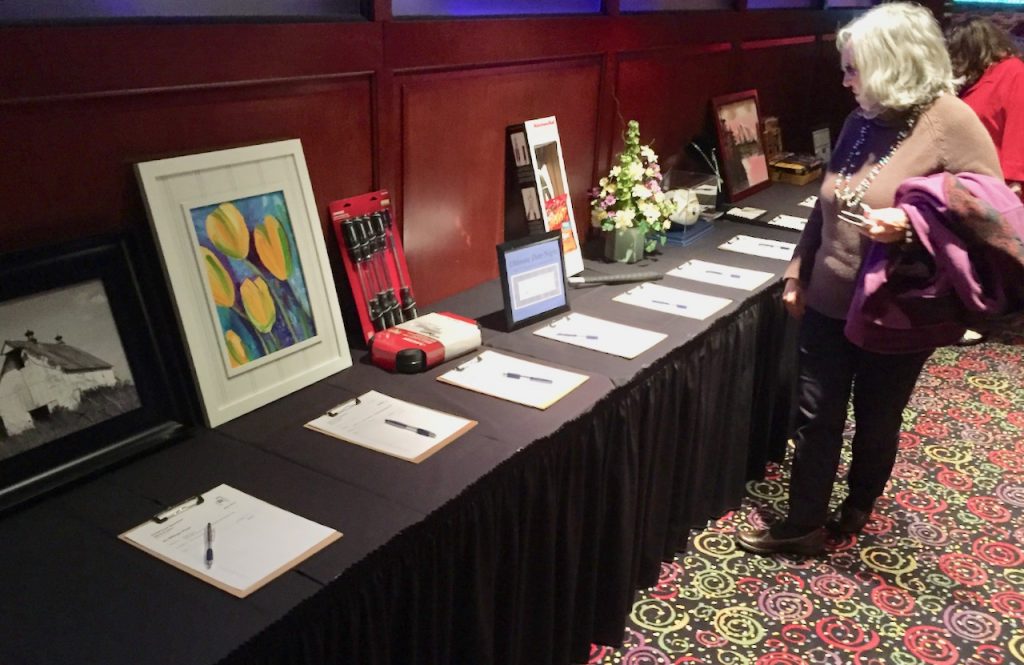 Bid Away Hunger is a fundraiser held at Louie’s Lounge of Mardi Gras Casino in Cross Lanes, WV. The event includes a silent auction and fun and games for participants. A small admission charge gets you in the door. Hors d’oeuvres will be included and there will be a cash bar. All money raised goes to support food distributions of United Food Operation. 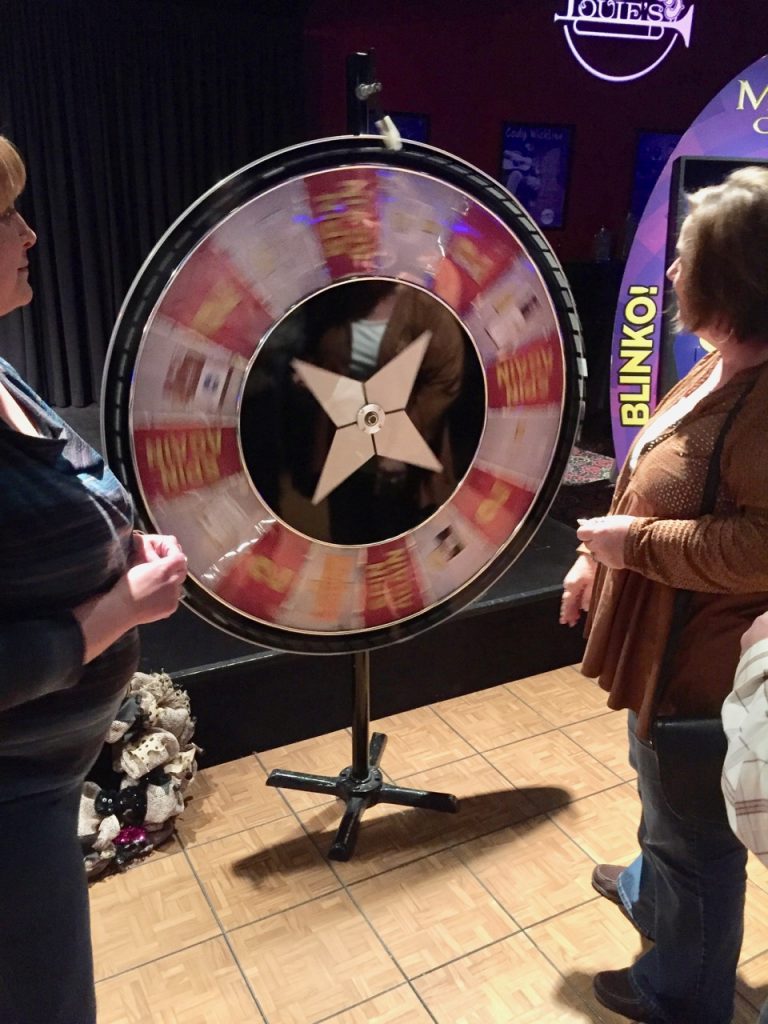 What items are needed?

Event organizer Misti Davis says that just about anything will work. “No item is too big or too small.”

When collecting an item, please obtain the name of donating business/person, person authorizing it, contact number, and retail value of item. Donation acknowledgement thank-you letters will be sent out to the donors.

Davis says you can also collect a few smaller monetary donations and purchase an auction item or buy a few smaller items that can used as game prizes or packaged with other items.

“I have donation letters and flyers I can bring to you,” says Davis. “If there is anyone I can reach out to, let me know.”

“We are on our way to another successful Bid Away Hunger,” said Davis, who is working hard to top last year’s fund raising effort.

To Donate Items or For More Information 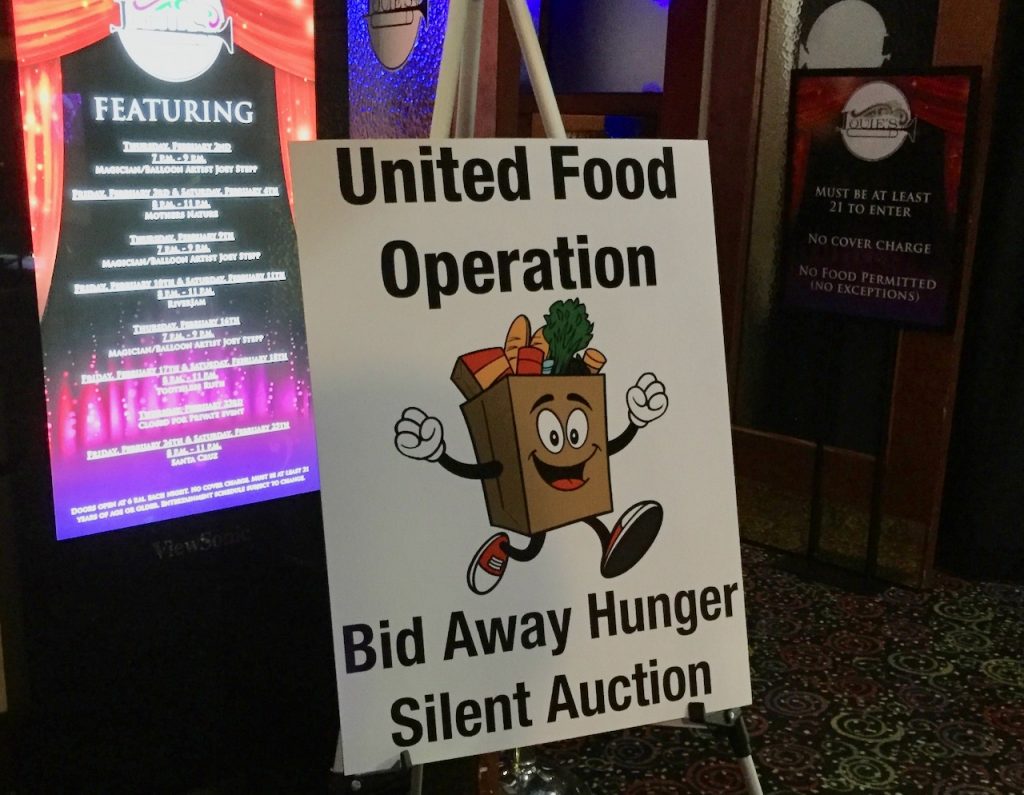 United Food Operation completed its first weekend of food distributions for 2018 with a flurry of activity. Activities began Friday and concluded on Saturday.

Early Friday morning, food was sorted into pantry portions with help from a crew of volunteers from the Nitro Food Pantry. Earlier in the week the food was purchased and delivered to the warehouse so it could be sorted. Donated foods are also sorted. The first week’s foods included a large amount of cans and other non-perishable food from a collection conducted by Dutch Miller Auto of South Charleston.

Then at 10:00 a.m., Elaine Harris, UFO’s chairperson, and a group of guests and volunteers conducted the winter kick-off ceremony at the warehouse.

This season’s food distribution program was dedicated in honor of Clifford Means, a longtime UFO volunteer who also serves as the group’s vice chair. In recent years, Cliff has been employed as a machinist by Bayer CropScience, Institute Plant, which is closing out its operations at the Institute Industrial Park later this year.

Cliff’s honor was announced by Connie Stewart, a manager at Bayer CropScience. During her tenure, Stewart has also done much to assist the UFO program. Since Bayer began operating in Institute, the company has been a strong supporter of UFO. Along with Dow Chemical, Bayer was instrumental in helping UFO obtain the permanent facility it now uses as its headquarters and food distribution center.

Chris Shinault and Andrew Ricks of SGS Petroleum Services Corp. were recognized for their company’s commitment to provide UFO with qualified fork lift operators for the distribution season. MH Equipment of Cross Lanes was thanked for donating the use of a nice forklift. MH Rents also donated the forklift last year.

Among those attending the ceremony were many United Food Operation volunteers and food pantry workers. Members of the news media were also there to cover the event. 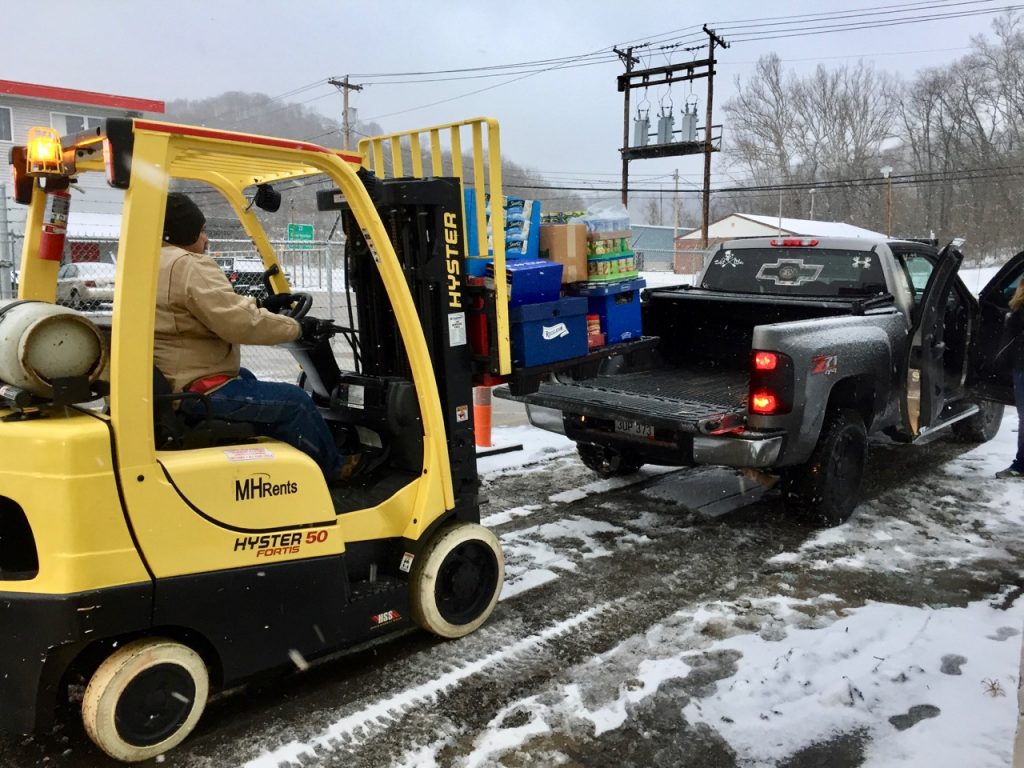 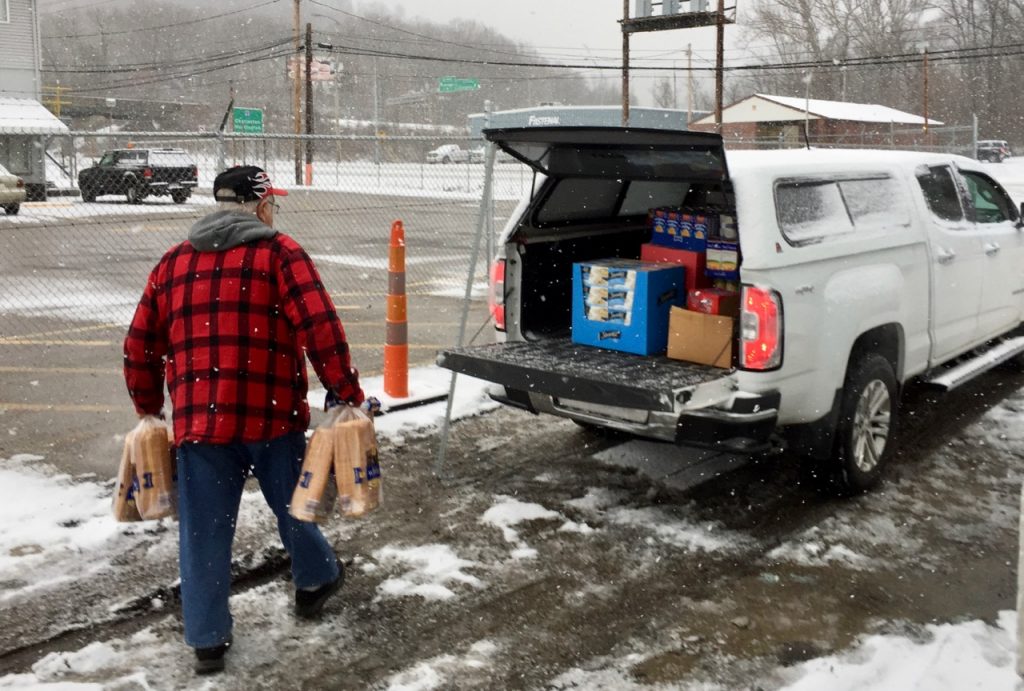 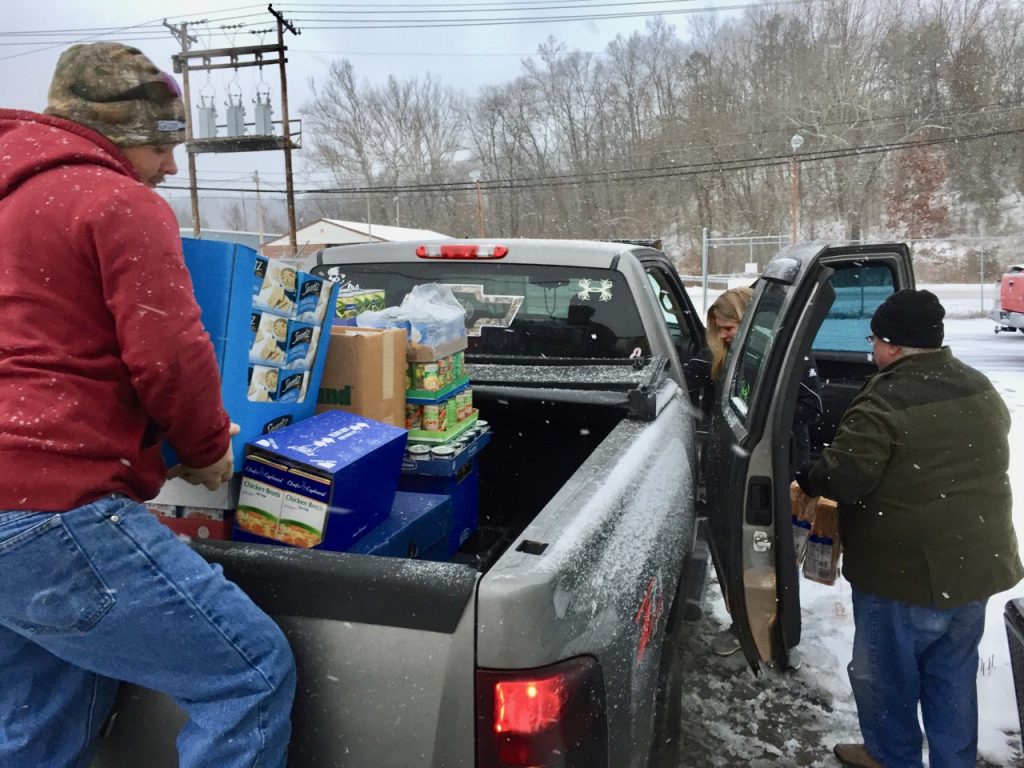