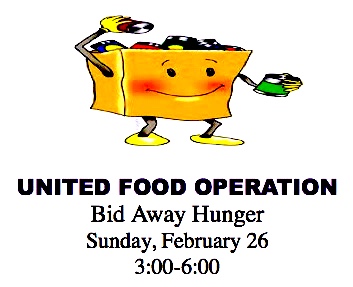 Come join us for an afternoon of fun while we raise money to fight hunger in Kanawha & Putnam counties. All proceeds will go to purchase food for 12 local community food pantries.

We will have games, prizes, and a Silent Auction.

The Silent Auction will include items from:

The 2017 United Food Operation (UFO) food distribution program will kickoff on Friday, January 13 at 11:00 A.M. and run through April 1, announced Elaine Harris, chairperson of the group.

The 12 UFO participating food pantries are all experiencing increased needs this season, so the organization expects to use all the help it can get this year.

“I am asking everyone to come to the United Food Operation warehouse for the kickoff program on Jan. 13 at 11:00 A.M. and bring monetary and food contributions,” said Harris. “Also, reach out to other companies and organizations and invite them to drop by with a contribution.”

Since 1982, UFO raises funds around the year and uses them each winter to purchase bulk foods needed by community food pantries around Kanawha and Putnam counties. Food is distributed to the pantries on Saturdays for 12 weeks each winter.

To support feeding needy people in our community, area businesses can collect funds or food during the winter season and UFO will take care of getting food to the community food pantries. UFO charges no overhead on monetary contributions. All the funds go to support food distributions in the Kanawha Valley area.

United Food Operation is an all-volunteer group that operates as a 501c(3) charitable organization. No salaries are paid and the group runs with donated labor and equipment out of donated warehouse space at the Institute Industrial Park. Dow Chemical Company maintains the warehouse facility on behalf of the group. Founded in 1981, the group conducted its first winter season food distribution program in 1982. This winter will be the 36th annual food distribution.

Food pantry representatives who participate in United Food Operation (UFO) gathered recently at Dow’s Institute plant to plan this winter’s assault on hunger.  The consensus is they are seeing lots of new faces at their pantries this year, so they need to double down to get through the winter. END_OF_DOCUMENT_TOKEN_TO_BE_REPLACED

A traditional West Virginia menu of eggs, bacon, sausage, biscuits, gravy, jellies, coffee, juice, and milk will be served. All UFO and food pantry volunteers are invited to attend free of charge. Those interested should RSVP to Nancy Grist at ngrist@cwa-union.org or 304-342-2023 by Monday, March 28.

Following breakfast, a short organizational meeting will be held, during which volunteers will be recognized. All food UFO & pantry staff, volunteers, and board members are invited.

At the end of the meeting, participating pantries will pick up their loads of food as usual. The event will wrap up the 2016 UFO winter food distribution program.

The next UFO activity will be the National Association of Letter Carriers annual food drive on Saturday, May 14. Volunteers are needed.

Community members got a first look at the new headquarters of United Food Operation (UFO)  Saturday during an open house in Institute.

UFO Chairperson Elaine Harris expressed the groups gratitude to Dow Chemical and Bayer CropScience for their generous donations, which led to UFO basically being given the newly renovated building through a very favorable lease. Surveying the completely remodeled facility, Harris remembered times in years gone by when UFO had to work out of less than optimum space.

“This is a wonderful space—UFO hasn’t always had it so good,” she said, recalling years when they had to move pallets of food around because of leaks in the roof and other times having to work out of basically unheated space in the middle of the winter.

For most of the past decade Bayer CropScience had provided the group use of a good building for food distribution that was located about 150 yards west of the current building. But with Bayer selling much of its Institute Industrial Park space to Dow Chemical last year, the former building’s lot was targeted for other uses and the building scheduled for demolition.

Knowing that would force UFO to find other facilities, the two companies set about solving the problem. During the transition period, Dow and Bayer got together and identified another building at the very northeast corner of the industrial park that would be good for UFO’s use, but it needed a lot of clean-up and renovation.

Dow agreed to lease the building to UFO at a most favorable $1/year, and Bayer agreed to take the lead on renovating the building to prepare it for UFO’s use. Working together, the two firms  did a great job on a relatively short timeline. United Food Operation was able to take possession of the building before the end of 2015.

The building turned out to be the best space UFO has ever had. It has its own private access off Rt. 25 and a totally fenced lot. Inside, the building has warehouse space, a conference/break room, an office, and a bathroom—all kept toasty warm with a good heating system, The cleaned-up, repaired, and freshly painted facility is now the pride and joy of the group.

Mayor Terry Greenlee, from the neighboring city of Dunbar, stopped by and welcomed folks to his part of the county. He expressed his appreciation the work of United Food Operation. He was accompanied by Dunbar Councilman Steve Arnott, who has long been a UFO supporter.

Telecommunications companies have long been core contributors to United Food Operation, providing many thousands of dollars in support through the years. Cheryl Black of  Frontier Communications told the group about the company’s efforts this year to raise funds for UFO in cooperation with members of the Communications Workers of America. Contributions from the local unit of Verizon were also acknowledged.

Other contributions acknowledged today were those from Clearon’s South Charleston plant, Chemores of Belle, and IVS Hydro of Institute.

Noble Pickens honored for his years of service

Harris announced that the 2016 food drive was dedicated to Noble Pickens of Dunbar.  For many years Pickens was a loyal volunteer, who took a lead role in purchasing food and managing distributions to the participating pantries. Recently, his health has greatly limited his volunteer time with the group.

On Friday morning, volunteers provided by the St. Albans Community Food Pantry prepared the pallets of food so they could be distributed to the pantries on Saturday.

On Saturday morning, before the Open House, the second weekly food distribution of the season was conducted. This week, UFO is indebted to the volunteers who came from SGS Petroleum Services at the Institute  Industrial Park.

Each week, different organizations takes responsibility for recruiting and supplying volunteers needed to perform food sorting on Fridays and loading the pantry trucks on Saturdays.

The first distribution-Saturday of the 2016 season went like clockwork at United Food Operation’s new warehouse facility. Food distributions will continue over the next 12 weeks. 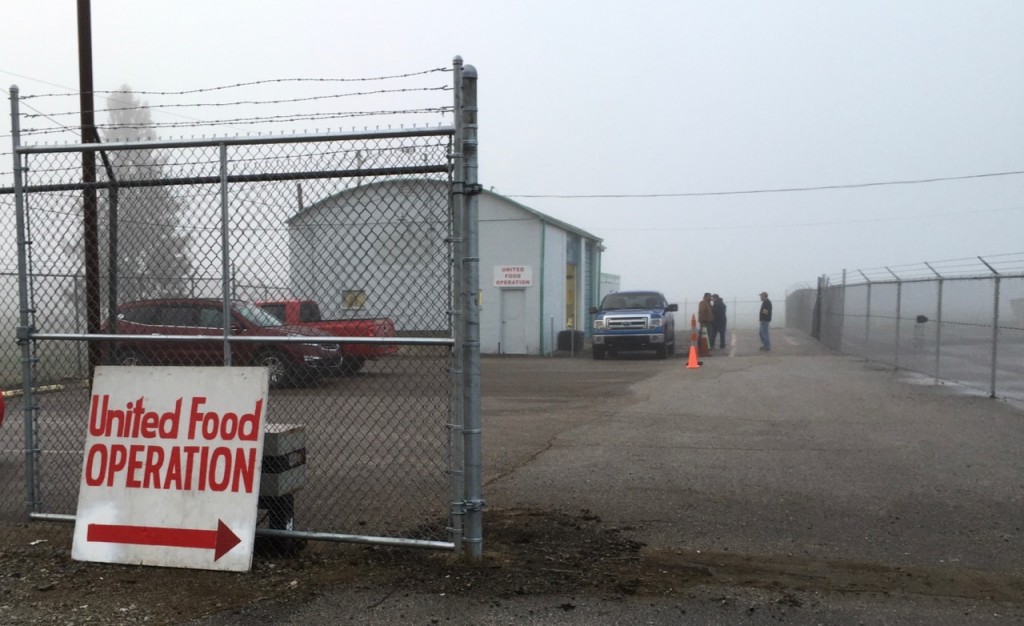 It was still foggy at 8:00 A.M. when UFO volunteers began receiving the pantry vehicles at the organization’s new warehouse and headquarters at Institute Industrial Park. END_OF_DOCUMENT_TOKEN_TO_BE_REPLACED 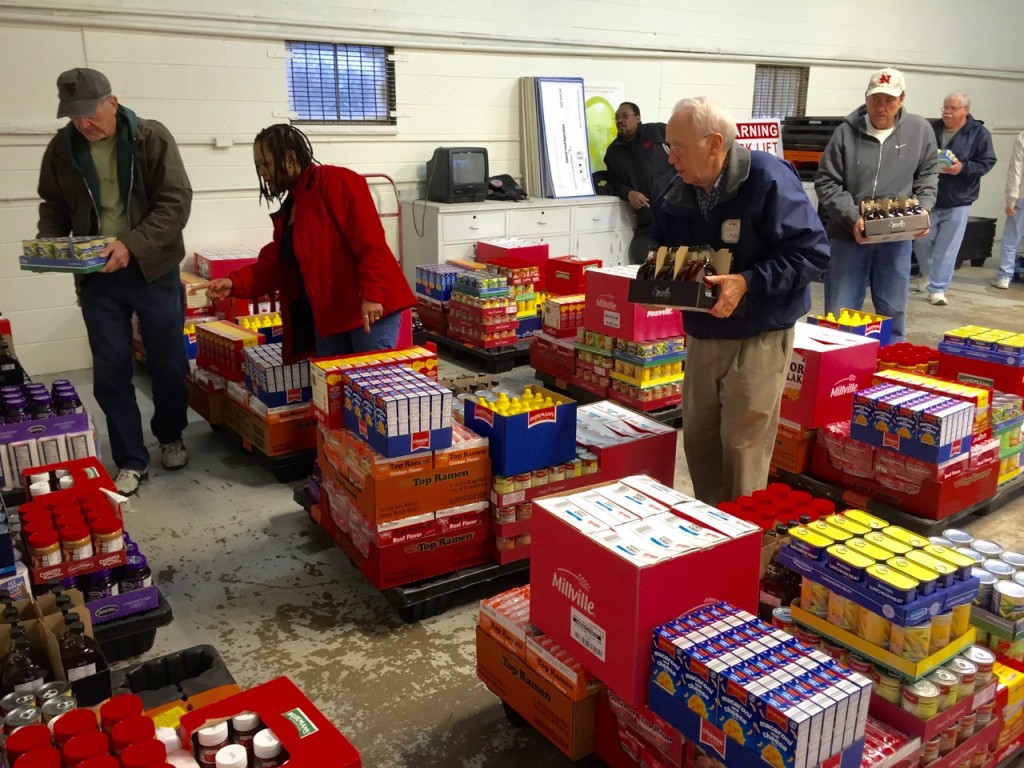 The 2016 United Food Operation, Inc. winter food distribution program will begin on January 8 and conclude on April 2 at a new distribution warehouse facility in Institute, WV.

Dow Chemical Company has donated a new and improved warehouse space for UFO to use at the Institute Industrial Park — in a part of the park that Dow recently purchased from Bayer CropScience. Over the past few months the facility, which is located across Route 25 from the Institute Post Office, was extensively renovated by Bayer Crop Science to prepare it for UFO’s use.

“We couldn’t be more pleased with our new  space,” said Elaine Harris, UFO chair person  “Our thanks go out to Bayer and Dow for their generous donations. This means so much to us.”

To recognize Bayer CropScience and Dow for their donations and to familiarize the community with the new space, UFO will hold an open house and fundraiser there on Saturday, January 16 from 10:00 A.M. until noon.

“For many years we have relied on many of the plants and companies here in the Kanawha Valley that have now downsized,” said Elaine Harris. “Therefore, in order for us to survive and to continue to supply food to the pantries in Kanawha and Putnam counties, we have to solicit new partners.”

United Food Operation, Inc. will hold the organizational meeting for its 2016 campaign on Thursday, December 10. The meeting will be hosted by Dow Chemical Company at its Institute, WV facility.

At the meeting, the dates for the 2106 Winter Food Distribution Program will be announced. UFO will also disclose the new location of its food distribution center.

The group had to move from its former space following the repurposing of the building in which it was located after Bayer CropScience sold the property earlier this year. The UFO board expressed their gratitude to Bayer for its generous support over the past decade. UFO is thankful to have had the use of the BayerCropScience warehouse space for those many years.

As part of the meeting agenda, representatives of the participating food pantries will help UFO leaders assess the current need for food in the region. UFO anticipates a strong demand for food this winter given the region’s weak economy and high unemployment. Plans for fundraising will also be discussed.

UFO needs volunteers to help at the downtown post office from 1:00 PM until around 6:00 PM.

NACL uses United Food Operation to distribute the donated food to food pantries around the Kanawha Valley.  UFO will truck the donated food from the Charleston post office to its  distribution center at the Institute Industrial Park. At the warehouse the food will be divided into portions for each of the 12 participating food pantries in Kanawha and Putnam counties. The pantries will then pick up the food and use it to help with their missions.

Those wishing to volunteer should contact Nancy Grist at ngrist@cwa-union.org or may call her at 304-342-2023 no later than May 1. Volunteers should plan to work at least a two-hour shift between 1:00 and 6:00 PM on May 9. Volunteers should be able to lift boxes weighing from 15 to 25 pounds. Food and soft drinks will be provided.

Volunteers will be working in the post office loading dock area, which is entered off Washington Street E., across the street from the Best Western Charleston Plaza Hotel.