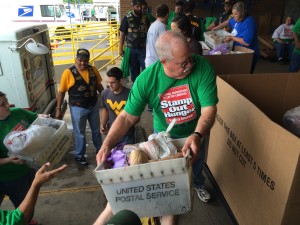 Around the region, the annual Letter Carriers food drive on May 10 netted over 50,000 pounds of donated food that will be distributed to West Virginia food pantries.

At the main post office in Charleston dozens of United Food Operation, Inc. (UFO) volunteers turned out to unload food from postal trucks and move it to the waiting UFO tractor trailer. A rainy day did not dampen the spirits of the volunteers nor of the members of the National Association Letter Carriers (NALC) Local 531, as approximately 21,000 pounds of food donated by postal patrons was received and reloaded at this site. 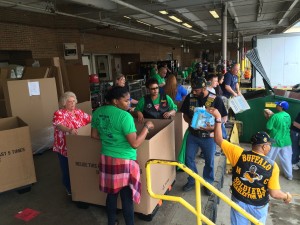 With the day having been proclaimed by Governor Earl Ray Tomblin as Letter Carriers Food Drive Day,  the large haul of donated food will be spread among pantries around south central and western West Virginia. The 21,000 pounds of  food given to United 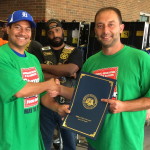 Food Operation will be shared with the 13 pantries it supports in Kanawha and Putnam counties. This food will be an immediate help to those in need in the Kanawha Valley.

** Click on the photos to view enlargements of our volunteers **

Details of the day 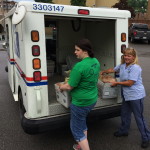 Postal delivery trucks arrive at the post office at the end of their day bringing back the donated food they have collected from postal patrons. 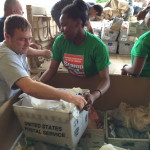 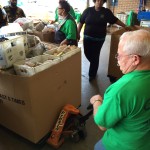 Once these dump bins are filled they are moved over to the weighing area. 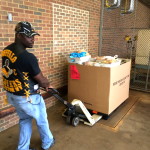 Each bin is placed on the scale and weighed. 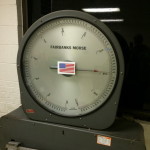 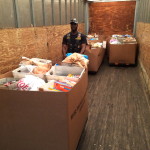 Bins are then loaded into the UFO trailer and hauled to the UFO warehouse in Institute. 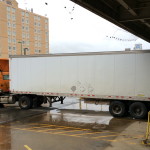 This tractor and trailer was provided, at no cost to United Food Operation, by Yellow Freight. This is the kind of contribution that allows UFO to put all the funds it raises toward buying food.  We thank Yellow Freight and all the others who made this successful day possible.

UFO will now distribute all the food donated from the Letter Carriers drive to its participating local food pantries . With the completion of this project, 2014 UFO distributions season will come to a close. Over the summer and fall months UFO will raise the funds needed to kick off its Winter 2015 program, which begins in January.